Loss of a Beloved Faculty Member, Tom Fleming
Apr 20 2017
Share to FacebookShare to TwitterShare to Google+Share to LinkedInShare to PinterestShare to EmailPrint this page

It is with deep sadness that Montclair Kimberley Academy announces the sudden and tragic loss of Tom Fleming, beloved teacher and coach. Tom died of an apparent heart attack while coaching his team at a meet on Wednesday, April 19 in Verona. He was 65. An integral part of our school's community, Tom had been at MKA for 18 years, most recently holding the position of fourth grade teacher and the varsity boys and girls Head Coach in cross-country and track and field.

Tom Fleming, a native of Bloomfield, New Jersey, was an American distance runner; 2-time NYC Marathon champion, outstanding coach, beloved teacher, exceptional colleague and extraordinary mentor. Tom groomed a number of the top distance runners in New Jersey in the last two decades, including three of the best in MKA school history. He said his greatest thrill was seeing his young athletes improve their times, distances and heights, and always striving to do the work necessary to be the best they can be. "I've enjoyed coaching the kids at MKA where they are the epitome of the student-athlete, and they strive to eventually attend the finest colleges they can."

MKA Athletic Director Todd Smith noted Fleming's contributions to his sport and to his students, "Tom Fleming was a beloved teacher, coach, mentor and friend to many and this is gut wrenching news for the MKA community and for the running and track community as a whole throughout Essex County, New Jersey and the country. Tom's love for his sport, love for his athletes and love for teaching the next generation of runners was truly remarkable. Most importantly, Tom loved the 4th graders he got to spend every day with and truly was an inspiration to all."

Tom's prestigious career did not start in the classroom. He discovered his love of competitive distance running in his junior year of high school, when a passionate track and field athlete was born. Taking his talents to Paterson State College (now the William Paterson University) in Wayne, New Jersey, Tom would graduate in four years with a double-major in Special Education and Elementary Education, a feat he holds equally as important to his many athletic accomplishments. As a William Paterson Pioneer, he would become a Four-time NCAA All-American, received the Special Achievement Award from the N.J. Sports Writers Association in 1973, became a New Jersey AAU three-mile champion in 1972 and AAU six-mile champion in 1969, 1970, and 1972, named the NAIA All-American in 1970 and was Conference champion for four consecutive years. As a senior in 1973, Tom entered the Boston Marathon, and passed the defending Boston Champion Olavi Soumalaninen of Finland, to secure the runner-up spot with a time of 2:17:03. This would become the first of Tom's two second-place finishes at the Boston Marathon. He was inducted to William Patterson University Athletic Hall of Fame on April 11, 1980. 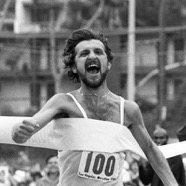 Tom went on to win the New York City Marathon twice in 1973 and 1975. He raced a strong fifth place at the 1976 Olympic Marathon trials, and finished fourth at the famous Fukuoka Marathon in Japan in 1977 (then the unofficial World Marathon Championship). His other marathon victories include the 1978 Cleveland Marathon, the 1978 Toronto Marathon, the 1981 Los Angeles Marathon, and the Jersey Shore Marathon three times, with a course record in 1981.

Most recently, Tom's impact was noticed by the Mercier Club, which recently bestowed upon the MKA track mentor the prestigious Monsignor Edward Larkin Award during the North Jersey Catholic Civic Organization's annual dinner.

Tom was once quoted as saying, "Somewhere, someone in the world is training when you are not. When you race him, he will win."

MKA Headmaster Tom Nammack described Fleming as "an extraordinary teacher, mentor, coach and colleague, whose legacy of excellence will make us better people and strengthen our community and school.''

Information regarding services to honor Tom will be communicated as they become available.